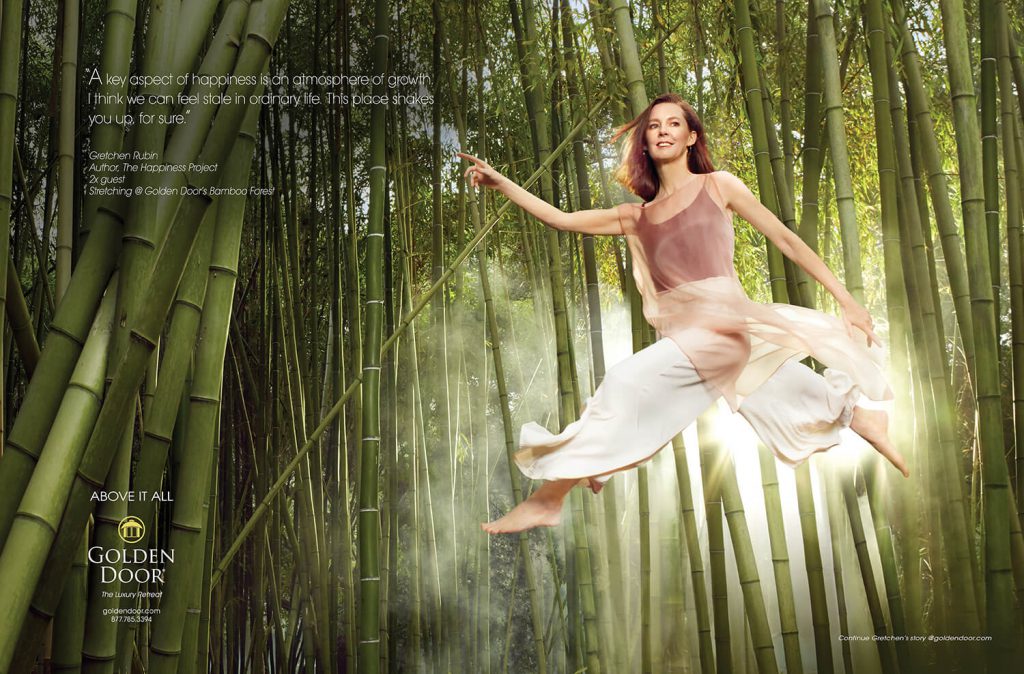 A key aspect of happiness is an atmosphere of growth. I think we can feel stale in ordinary life. This place shakes you up, for sure.

What first brought you to Golden Door?

Gretchen: I went years and years ago, right after I got married because my mother-in-law treated my mother and me. This last time I went with my sister. Her dream was always to go to the Golden Door, so this was a great sisterly adventure. She lives in L.A. and has a little kid, so it was nice for her to be someplace that really felt like she was having a totally different experience, and yet was convenient. You feel transported when you walk across that footbridge.

How does Golden Door play into your own happiness project?

Gretchen: This isn’t just a place where you go to get a massage. I could have a massage every day of my life, and it would not be enough. But to be happier, an atmosphere of growth is actually what will build more happiness. For me, I had never done Zumba. That made me feel like I was learning something or trying something new.

It’s a very convenient kind of no judgment zone to try new things. I think for some people, they are very self-conscious, or they do really feel judged. It’s nice to go into a place where you have gotten to know these people, and probably a lot of them haven’t done it before either.

It’s a very warm environment in which to have an atmosphere of growth.

You mentioned that Golden Door really caters to the Four Personality Types.

Gretchen: I was very impressed by how everyone could find their own equilibrium in a lot of different ways. Some people like structure, but some people like spontaneity and freedom.

There’s time for silence, and there’s also time for conversation. If there has been a little bit too much conversation for you, it’s easy to get more silence. And if you feel like you want more conversation, it’s there. I feel like the way that it’s structured makes it easier for even more introverted or shyer people to feel comfortable entering in.

It’s not easy to meet both extremes for everybody. Golden Door did a great job of that so that people who are happiest in different environments could find the place that they needed.

Can you speak to how outer order can bring inner calm?

Gretchen: It is funny, outer order really does contribute to inner calm. It’s like even if you can’t manage it in your own environment, you can borrow it for a time here and get that sense of focus.

At Golden Door, you don’t even bring much. It’s like, yeah, you’ve got one pair of shoes, or maybe two pair of shoes. It’s like, “Are you going to wear your running shoes or your flip flops? The room is very beautiful, but it’s spare. There is this feeling of everything being in its place, and everything is needed. There’s not a lot of noisy art. There’s not music pumping through the air.

I think for a lot of people, especially people who have lives that are crowded and chaotic, it’s very restorative to be in a place that is so beautifully ordered. Of course, that’s very Japanese, very Asian. Even bamboo trees are a very orderly kind of plant.

For a lot of people, they want to make space for that to happen in their lives. They need to step back. I saw it happening all around me. Several people commented to me that they’d had a major revelation or epiphany. I think that they had gone there thinking that they needed to give themselves an atmosphere that would engender that.

Would you say the program and environment help you to do that, but so do the other guests?

I came away with real new friends that I’ve seen in New York, and that I’ve been emailing with. That’s pretty rare when you can just show up someplace, and then you have a real friend. Because there is this intimacy. There is this sort of trust that everybody just has in each other right away. It’s quite extraordinary.

People do want space, but they also want to have meaningful connections with people. Nothing is more energizing than feeling like you’re really connecting to someone new. As you get older, that’s harder because it’s harder to make new friends because people are busy, and you don’t have that much opportunity to come against people that you don’t already know.

What was an “Aha” moment for you while you were there?

Gretchen: It’s pretty unusual for me to feel an immediate intimacy with people. I very quickly relaxed into that, and I think that is unusual. That easy friendship. An unspoken acceptance of myself and of other people. I think that’s unusual. I was happily surprised by that.